During the last few weeks I was busy exploring the internal working of Handles under Windows , by disassembling and decompiling certain kernel (ntoskrnl.exe) functions under my Windows 7 32-bit machine.In the current time I am preparing a paper to describe and explain what I learned about Handles. But today I’m here to discuss an interesting function pointer hook that I found while decompiling and exploring the ObpCloseHandleEntry function. (Source codes below).

As I said earlier , the OkayToCloseProcedure is called inside ObpCloseHandleEntry function.In general this function (if the supplied handle is not protected from being closed) frees the handle table entry , decrements the object’s handle count and reference count.
Another case when the handle will not be closed is if the OkayToCloseProcedure returned 0 , in this case the ObpCloseHandleTableEntry returns STATUS_HANDLE_NOT_CLOSABLE.
I will discuss handles in more details in my future blog posts.

So how the OkayToCloseProcedure is called ?

An additional point is that the OkayToCloseProcedure must always run within the context of the process that opened the handle in the first place (a call to KeStackAttachProcess). I don’t think that this would be a problem if ObpCloseHandleTableEntry is called as a result of calling ZwClose from usermode because we’ll be running in the context of the process that opened the handle.However, if ZwClose was called from kernel land and was supplied a kernel handle KeStackAttachProcess will attach the thread to the system process. The reason behind that is that we always want to access the right handle table (each process has a different handle table, and for the kernel we have the system handle table).

A second way to get an object’s type is by getting an existing object’s pointer and then pass it to the exported kernel function ObGetObjectType which will return a pointer to the object’s type.

A third way is to get a pointer to the ObTypeIndexTable array, it’s unexported by the kernel but there are multiple functions using it including the exported ObGetObjectType function.So the address can be extracted from the function's opcodes , but that will introduce another compatibility problem. After getting the pointer to the ObTypeIndexTable you'll have to walk through the whole table and preform a string comparison to the target's object type name ("Process","Thread" ...etc) against the Name field in each _OBJECT_TYPE structure.

In my case I hooked the Process object type , and I introduced in my code the 1st and the 2nd methods (second one commented).
My hook isn’t executing any malicious code !! it’s just telling us (using DbgPrint) that an attempt to close an open handle to a process was made.
“An attempt” means that we’re not sure "yet" if the handle will be closed or not because other checks are made after a successful call to the callback.And by a successful call , I mean that the callback must return a value different than 0 that’s why the hook function is returning 1. I said earlier that the ObpCloseHandleTableEntry will proceed to check if the handle is protected from being closed  (after returning from the callback) if the OkayToCloseProcedure is null or if it exists and returns 1 , that's why it’s crucial that our hook returns 1.One more thing , I’ve done a small check to see if the object type’s OkayToCloseProcedure is already NULL before hooking it (avoiding issues).

Example :
For example when closing a handle to a process opened by OpenProcess a debug message will display the handle value and the process who opened the handle.
As you can see "TestOpenProcess.exe" just closed a handle "0x1c" to a process that it opened using OpenProcess(). 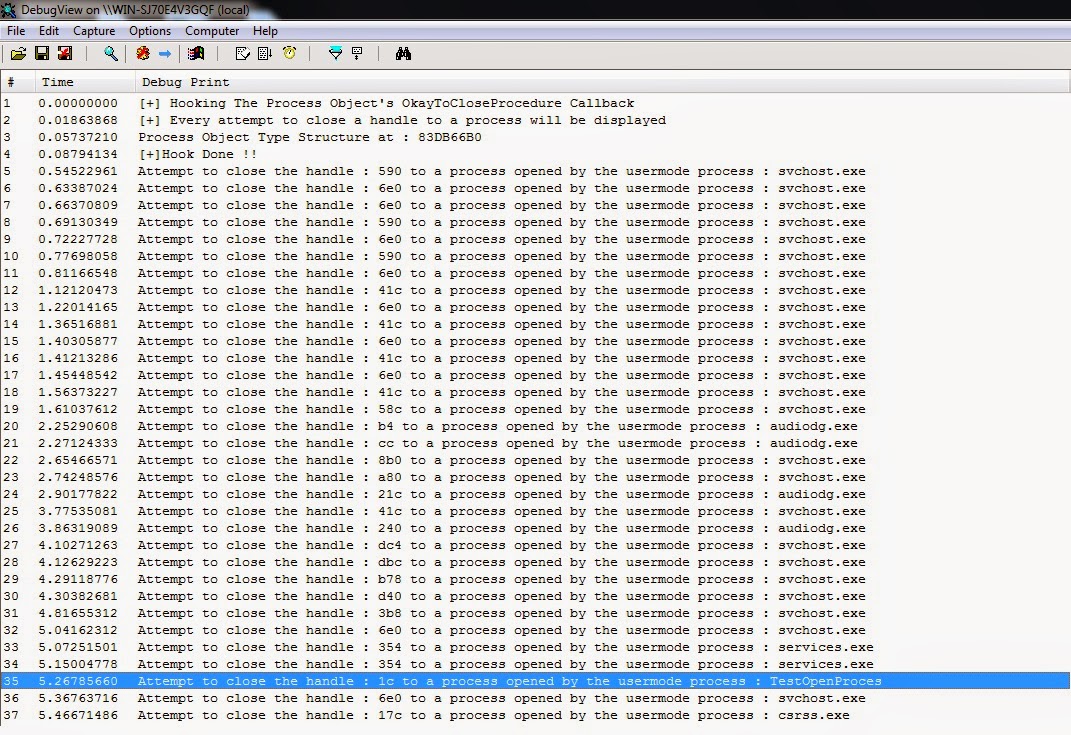 P.S : The hook is version specific.


Your comments are welcome.